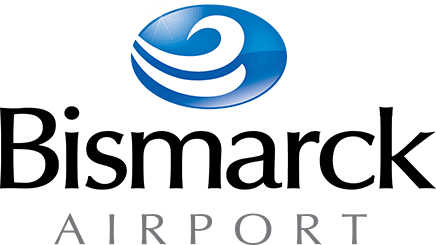 The original airport was a cow pasture located on the flats between Bismarck and Mandan, across the road from what was once Jerry's Supper Club. It was moved to Bismarck on the lowlands of South Washington Street during the 1920s.

The first officially owned airport of the City of Bismarck came into being by the leasing of 80 acres of land from F.B. Straus and Cora S McLean. For a time it was known as Straus Field. The (old) terminal buildings and hangars were located on the original tract of ground (80 acres,) which was later purchased by the city in 1940. At this time, the city purchased an additional 60 acres from the Wachter family. In 1940, the city acquired 160 acres from the War Assets Administration and has since purchased other tracts of land making a total of 2,400 acres today.

The first airline operation in Bismarck commenced in June of 1931, with Northwest Airlines making its inaugural flight using the "Stinson Detroiter" built by Stinson Aircraft. Types of aircraft used after the Detroiter were, the Hamilton, Lockheed 10 A, Lockheed 14 H, Douglas DC-3, Martin 202, Douglas DC-4 and DC-6, the Lockheed Electra, the Boeing 727, and now DC-9s.

Other airlines were used as well. Hanford Airlines was the first carrier operating on a north-south route to Bismarck and used a Lockheed Vegas plane. Mid-Continent Airlines merged with Hanford later and originated a north-south route from Tulsa, Oklahoma, to Bismarck using Lockheed 12s in 1939. This service was discontinued during World War II and resumed again in 1946. In 1952, Braniff Airlines purchased Mid-Continent Airlines and served this area with DC-3 equipment.

The 7th Ferry Command of the U.S Army Air Corps used the airport from 1943 to 1946. The land on which the main terminal is now located was formerly part of Fort Lincoln. It was given to the city in 1946, for airport purposes.

The first control tower was an addition to the (old) terminal building. Off-site drainage improvements, completed in 1950 and 1951, were part of the airports first construction project. The NW-SE runway, which was part of the main runway, was reconstructed in 1952, and the second phase of this runway construction was completed in 1957. It was lengthened to 6,925 feet in 1962 to accommodate jet aircraft. In 1978, another extension was completed stretching the main runway out to 8,794 feet, its current length today.

A major accomplishment in field improvements was made in 1964 and 1965, when a city water main and sanitary sewer was extended to provide adequate service to the "new" terminal that was under construction. A new north-south runway was built, taxiway and ramp to the new terminal was completed, field lighting was installed, the surface drainage project was complete, and a parking lot and access road to the new terminal was also completed.

The new terminal building, which had been long needed for growing air service, was a fitting climax to this construction phase, providing airport facilities and passenger amenities to the citizens that were befitting that period of time.

An addition was made to the terminal in the late 1970s, to include a baggage belt and baggage claim area. Construction again in the early 1980s, added a substantial amount of space to the south end of the terminal and included a second level with passenger boarding bridges attached.

In 1976, a new air traffic control tower was built on the south side of the passenger terminal. The old tower, located further north on the field was later taken down.

As time went on, and Bismarck grew, plans for a new terminal were born and in the spring of 2005, the City of Bismarck completed construction and inaugurated the new 70,000-square-foot terminal, which is used today. The terminal building is 57 feet tall with sky painted vaulted ceilings, a geothermal heating and cooling system, and a state of the art baggage handling system.

Other amenities include a restaurant with beer and wine service, business kiosks with plug-in internet access, and wireless internet. The new building is located just northwest of the old passenger terminal, which was demolished after moving into the new building.

United Express added scheduled service to the airport August 1, 1992. They operate direct flights from Bismarck to Denver, Colorado. Low cost carrier Allegiant Airlines added scheduled flights direct from Bismarck to Las Vegas in May 2004, Mesa, Arizona service in October of 2008 and Orlando Stanford service in November 2013. Allegiant typically operates two to six flights per week to each destination depending on the time of year. Delta Air Lines, since merging with Northwest Airlines in 2009, continues to operate regularly scheduled flights from Bismarck to Minneapolis, Minnesota They have been serving the Bismarck Airport for over 75 years. Frontier Airlines began non-stop service to Denver, Colorado in May of 2012 and continues to operate on a seasonal basis. The newest airline to Bismarck is American Airlines with daily non-stop service to Dallas Ft. Worth and Chicago O'Hare. American started service in Bismarck October 2014. In 2018 United added service to O'Hare to compliment their Denver Service.